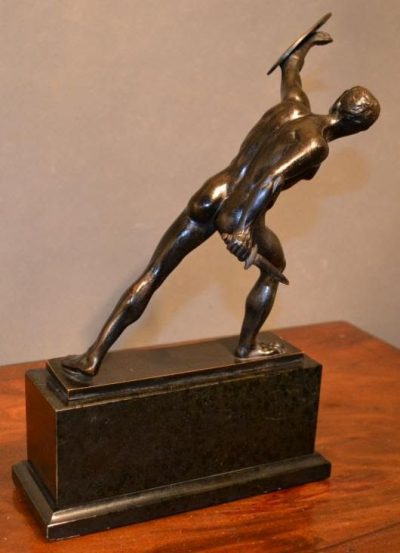 Our free-spirited gladiator bronze sculpture with sword and shield on a marble plinth fine toned in patinaed dark bronze finish. The bronze represents the famous Greek sculpture of a young fighter portrayed in the act of protecting himself from the aggression of the enemy with the shield which is attached in the sculpture to the left arm raised on guard. The original marble, now in the Louvre museum’s Greek Statuary in Paris, can be dated to the first century BC. and was discovered near Neptune in 1611, becoming one of the most valuable pieces in the collection of Cardinal Scipione Borghese. Subsequently, in 1807, it was bought by Napoleone Bonaparte and placed in the Salle d’Apollon at the Musée Napoléon.
The sculpture, appreciated for its timely and anatomical rendering, caught in a harmonious athletic gesture, was often reproduced in large and small scale since the 17th century. Ours is late 19th or early 20th century and will be a bold statement of classicism on your mantle or side table and no-one can match it!
H. 14.5″, w. 10″, d. 6″. $675.